What Is a Red-Colored Flea? 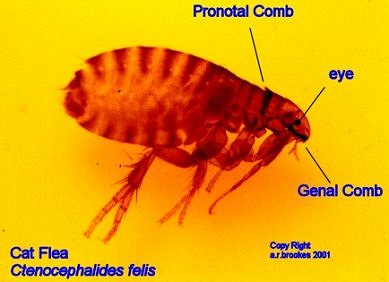 While the exact number remains unknown, scientists estimate there are around 2,000 different species of fleas inhabiting Earth. Some of these species are invasive and prefer to feed on the blood of dogs, cats and humans, whereas others feed strictly on the blood of birds or small animals. Nearly every species of flea, however, possesses either a black or brown-colored body.

But there are exceptions to the color of a flea’s body, and in some cases you may stumble upon one with a reddish appearance. It’s not uncommon for homeowners to mistakenly identify these red-colored fleas as lice or bed begs, due to their unusual color. Nine out of ten times, though, these are in fact fleas. They may not possess the distinct black-to-brown color as other fleas, but red fleas do exist.

There are two possible scenarios regarding red-colored fleas, one of which is that it’s a regular human or dog flea that recently feasted on the blood of a host. If a flea consumed blood within the past few hours, it may look visible red because of the presence of blood in its stomach. Fleas are somewhat transparent, allowing the red blood to show from outside of its exoskeleton. This phenomenon usually goes away after 3-4 hours, at which point the flea will revert back to its normal brown-to-black colored appearance.

Of course, there’s one type of flea species that’s known for its distinct reddish colored appearance: the cat flea (Ctenocephalides felis). It’s roughly 1-2 mm in length and has a deep reddish, sometimes brown, colored body. Surprisingly, the cat flea is also one of the most, if not the most, common flea species on the planet. As the name suggests, it prefers to feast on the blood of cats, biting into feline hosts several hundred times per day. But don’t let that fool you into thinking you or your dogs are safe from this pest. The cat flea is also known to feast on the blood of humans, dogs, ferrets and other small pests.

To recap, yes red-colored fleas do exist. In most cases, a red flea is either the cat flea (Ctenocephalides felis), or it’a a regular dog flea that recently feasted on the blood of a host. Don’t be alarmed if you notice red fleas in your home. Eliminating them is just as easy as any other flea.

Have you seen a red-colored flea before? Let us know in the comments section below!