Cat Flea (Ctenocephalides feli) 101: What You Should Know 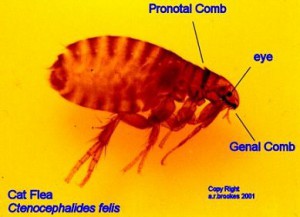 Anatomical breakdown of the cat flea.

The cat flea (Ctenocephalides feli) is one of the most common and widespread species of fleas in the world. As the name suggests, it prefers to feast on the blood of cat; however, cat fleas are also known to target humans  and other mammals. A single cat flea can bite into its host several hundred times a day, leaving behind painful, itchy bumps .

If you’re struggling with an infestation of cat fleas in your home, you  should familiarize yourself with the characteristics of these parasites. Doing so will give you a better understanding of how to eliminate them from your home. Allowing cat fleas to remain unchecked will result in rapid multiplication of their population numbers, compounding the problem.

Physical Characteristics of The Cat Flea

The cat flea is similar in appearance to the dog flea, only with a slightly shorter and wider body. Adult cat fleas are usually about 1-2 mm long and possess a reddish-brown color.

Like most other flea species, the cat flea is exceptionally flat, which is a natural defense mechanism that protects it from being squished. This is why it’s difficult — if not impossible — to kill a flea by squishing it between your fingers. Nine out of ten times the flea will simply jump right back out when you release your fingers. Instead of squishing it, dig into the center of it with the nail of your thumb. Alternatively, you can drown fleas by dropping them into a glass filled with soap and water.

I hate the be the bearer of bad news, but the cat flea is known to transmit several different diseases, including Bartonella, murine typhus, and apedermatitis. Tapeworms can also be transmitted into humans, cats, dogs and other hosts. In for transmission of a tapeworm to occur, though, the host most consume an infected flea (flea bites won’t transmit tapeworms). 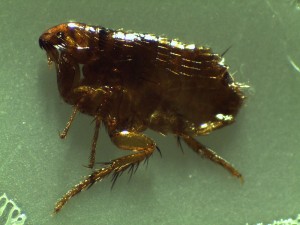 Because cat fleas spend 75% of their lives in places other than a host, it’s imperative that individuals and families struggling with infestations treat their entire home. Picking individuals fleas off your dog or cat’s coat one-by-one isn’t going to solve the problem, as cat fleas are likely hiding in the carpet, bedding and other locations throughout your home.

You can read more about treatment and prevention here at FleaBitesonHuman.com, but the key thing to remember is that most cat fleas are hidden from plain sight. In order to eliminate them from your home, you must cover all of the cracks, crevices, and nooks and crannies, vacuuming the floors and washing all bedding.