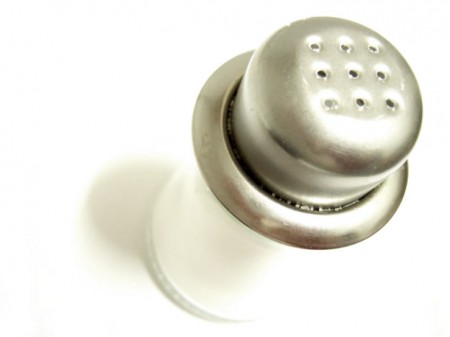 Who says you have to spend hundreds of dollars on expensive flea medicine to keep these blood-sucking parasites out of your home? While FrontLine, Advantage, and similar Insect Growth Regulators (IGR) and Insect Growth Inhibitors (IGI) products are highly effective at killing and preventing fleas, they aren’t cheap by any means. A single box (3 months of medicine) of FrontLine, for instance, typically costs around $30-$50 bucks. At $50 bucks a box, that’s $200 to protect a single dog or cat over the course of a year!

If you’re struggling with a flea infestation but don’t have financial resources to purchase premium IGR or IGI medicine, you should consider using salt. Yes, salt — the same stuff that you sprinkle over your french fries — can be used to effectively keep fleas at bay. And being that it typically costs just a couple bucks per pound, it’s an incredibly inexpensive way to exterminate these blood-sucking parasites.

The Flea-Killing Power of Salt

How exactly does salt kill fleas? Unlike most treatment medicines, salt doesn’t use harsh chemicals to kill fleas. Instead, it kills them through dehydration. When a flea steps on a pile of salt, the moisture content in its body is immediately extracted, killing the flea almost instantaneously.

Tips For Treating Fleas With Salt

There are a couple of things you should know about treating flea infestations with salt, one of which is the potential for ingestion by small pets. If you own a dog or cat (or both), you should take them a friend or family member’s home until you’ve treated your home with salt. Small pets may become ill from consuming salt. Granted, a teaspoon here or there probably isn’t going to cause any serious issues, but allowing your pet to lick up an entire room covered in salt can lead to organ failure, seizures, or even death.

To improve the effectiveness of salt, it’s recommended that you first run it through a coffee grinder. Basically, this turns the salt into a finer, powder-like consistency, which subsequently covers a greater surface area. And when more surface area is covered in salt, there’s a greater chance of fleas accessing it.

Apply the powdered salt throughout your home, paying close attention to baseboards, rugs, underneath furniture, and pet bedding. Wait a day or two before vacuuming it up. This should be more than enough time for it to have killed most of the flea population. Double-check to make sure the carpet is clean and free of salt before allowing your pets to come back. Assuming it’s salt-free, you and Fido can once again enjoy a home without the nuissance of fleas.