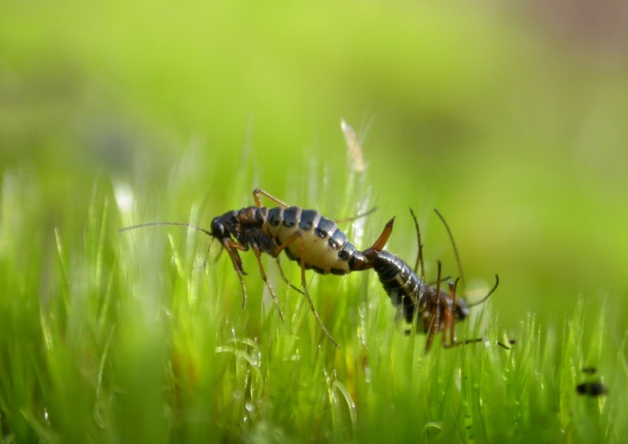 Close-up photo of the elusive snow flea: taken by Trevor and Dilys Pendleton.

The snow flea (Hypogastrura nivicola) is an elusive species of flea that — unlike most blood-sucking fleas found on our pets and in our homes — doesn’t pose a threat to people. Snow fleas are incredibly rare, however, and have only been spotted in a few cold regions throughout the world.

Recently, this elusive species was found in the dew-covered grass in Sherwood Forest of Nottinghamshire, England (yes, the same place as Robin Hood). Trevor and Dilys Pendleton visited Sherwood Forest were working on a project for Notts County Council when they discovered a pair of snow fleas mating in the grass. The two quickly grabbed their camera and snapped a photo of the mystical flea.

Here’s a fun fact: scientists are currently trying to extract the anti-freeze-like proteins found in the snow flea to use in various applications. For instance, there’s some belief that the snow flea’s proteins could be used to protect transplant organs during transit. If an organ needs to remain cool but not frozen, perhaps the snow flea’s natural proteins might be able to help. There are even some scientists who are tying to incorporate the proteins into ice cream. These projects are still in the early stages of development, so don’t expect to see “snow flea protein” listed as an ingredient on your favorite ice cream.

“It is always exciting when we are able to discover a new species within Sherwood Forest. It is the first time that it has been recorded within the natural habitats at Sherwood Forest so we are very pleased to have made this significant find. People can relax, the snow flea bears absolutely no relation to fleas apart from the name,” said Notts County worker Trevor Pendleton.

What do you think about the snow flea? Let us know in the comments section below!