Why Do Fleas Only Bite Me? 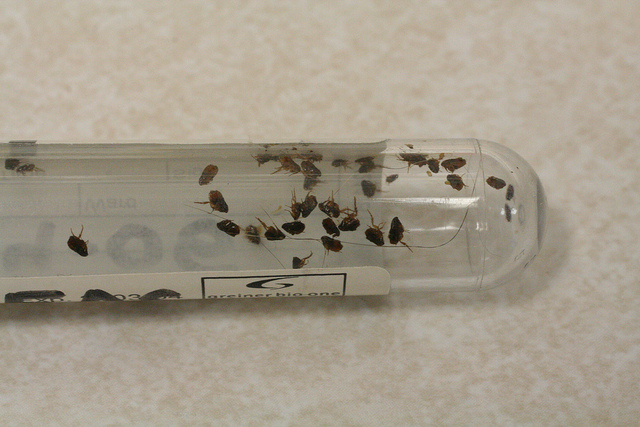 flea bite, flea only attracted to me, fleas biting, how fleas bite, Odor, Olfaction, why do fleas bite me

Ever wonder why fleas choose to bite YOU when other people are around. Perhaps you’re sitting in the living room watching television with friends and family members and all of as sudden you feel bite around your ankles. If this were a one-time phenomenon, it wouldn’t be of any concern. But fleas are naturally attracted to some people more than others.

Unfortunately, there’s no concrete scientific reasoning as to why fleas prefer some people more than others. Feeding preferences are found in a number of insects, including mosquitoes. Some people get eaten alive by mosquitoes, whereas others seem to possess some natural barrier against these pests. Fleas exhibit a similar behavior, selectively choosing their host based on some unknown criteria.

One possible theory is that fleas are attracted to certain bodily odors, which an individual may or may not posses. Just because you shower or bathe on a daily basis doesn’t necessarily mean you are odor-free. Fleas have poor eyesight but a keen sense of smell, which is essentially how they locate warm-blooded hosts in the dead of night. Using their keen sense of smell, they may be able to find some people more easily than others.

If you’re being targeted by fleas, try making some changes to your normal daily routine in an effort to eliminate any odors that could be attracting them. Using a new shampoo, condition and body wash, for instance, could throw off their sense of smell so they are no longer attracted to you. If you normally wear cologne or perfume, avoid using it for a day to see whether or not it helps. Small changes such as this can make a world of difference in masking your odor from fleas.

But it’s not just topical products that can leave flea-attracting scents on your body; your diet also plays a role in your bodily odor. Try mixing your diet up to include more fresh fruits and vegetables and less processed foods. Processed foods are often riddled with chemicals that fleas and other insects can smell. By eliminating them from your diet, you’ll make yourself less appealing to fleas.

The key thing to remember is that you want to change your normal daily routine if you are being singled out by fleas. Making some small changes to your routine, such as changing your shampoo and/or diet, is discourage fleas from biting you.

Are fleas attracted to you? We’d love to hear your story in the comments section below!