Flea Anatomy 101: What You Should Know 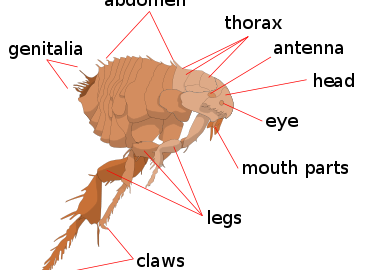 Fleas are wingless, bloodsucking insects in the order Siphonaptera. While most people have seen or even encountered a flea at some point in their life, few know about their anatomy. This is probably due to the fact that a typical flea is only 1-3 mm in length, making them difficult to see. If you’re interested in learning more about flea anatomy, keep reading. 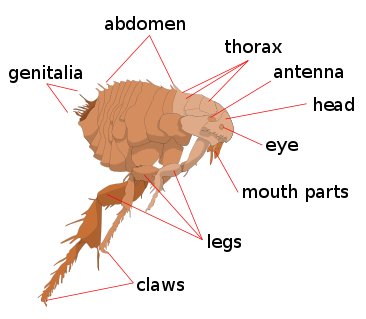 As you can see in the diagram depicted above, fleas possess massively long legs in proportion to the rest of their body. Using their hind legs, they are capable of ‘springing’ up into the air, reaching heights up to 7 inches! This makes the flea a very agile agile pest that can quickly escape harm’s way with a simple jump. Jumping is also how the flea attaches itself to a host.

According to study performed by researchers at the University of Cambridge in England, fleas actually use their feet (tibiae and tarsi) to begin the jumping thrust. They were able to discover this by recording flea jumps in a slow-motion camera.

Fleas have an incredibly tough, hard-to-break body that acts as a natural barrier of protection. You can literally attempt to squish a flea by pressing one between your fingers without causing any damage to it. The most effective way to kill a flea using your hands is to roll it over the tip of your fingernail where you can stab through it. Even then, however, you run the risk of having the flea jump away.

It’s estimated that fleas have been on this planet for over 300 million years, and during this time they’ve developed some unique defense mechanisms, including a hard body.

Once a flea finds a host, it will bite into a soft part of exposed tissue to feast on its blood. Fleas, much like mosquitoes, use a hollow tube-like extension that penetrates through the host’s skin. Unlike mosquitoes, however, fleas have two distinct mouth parts: one that sucks the host’s blood and another that injects the host with partially digested blood.

Fleas are able to transmit diseases to humans, pets and other mammals because they force digested blood into their host when biting. Assuming the flea is carrying a tapeworm, for instance, this parasite will travel into host’s upon biting.