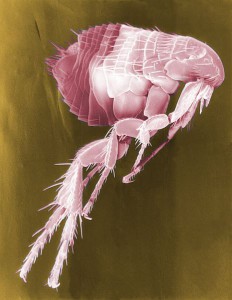 Interested in learning more about the all-too-common blood-sucking parasite known as the flea? We’re going to explore these parasites a little further, revealing some not-so-fun facts about them and their behavior. While you may already know some of these facts, chances are there are others that will surprise you.

There Are Over 2,000 Species of Fleas

Taxonomists have classified over 2,000 species of fleas, some of the most common being Cat flea (Ctenocephalides felis), Dog flea (Ctenocephalides canis), Human flea (Pulex irritans), Moorhen flea (Dasypsyllus gallinulae), Northern rat flea (Nosopsyllus fasciatus), Oriental rat flea (Xenopsylla cheopis). Most of species of fleas do not bite humans, feasting on the blood of smaller animals instead.

Females Can Lay Thousands of Eggs

One of the reasons why controlling flea infestations is such as a challenge is because of the females exceptional ability to reproduce. Just a single female flea can lay between 2,000-2,5000 eggs in her lifetime, spawning an entire generation of baby fleas in her wake. And considering the fact that there are probably multiple female fleas in an infestation, it’s easy to see just how quickly their numbers can spiral out of control.

Fleas Must Feast Within a Week of Spawning

After they spawn from the larvae, fleas have approximately one week to find and feast on a host’s blood. If they fail to locate a host, they won’t have the energy to continue their search, at which point they die. You can use this to your advantage by protecting yourself, and your pets, from fleas for a full week. Taking the flea’s source of energy away from them can make a massive dent in their overall population numbers.

To fleas are “good jumpers” would be an understatement. If you’ve ever seen one up close and personnel, you’re probably well aware of just how high they can jump — which is surprising considering their small size. A typical 1-3 mm flea can jump nearly 8 inches into the air, allowing it catch hosts such as dogs and cats with ease.

Fleas Can Wait In The Pupae Stage For Half a Year

Did you know fleas can stay in the pupae stage for up to 6 months, waiting until the conditions are just right to hatch? This is why you often find fleas in the early-to-mid spring season. The larvae remain in a dormant state throughout the winter and hatch once the temperature has warmed.